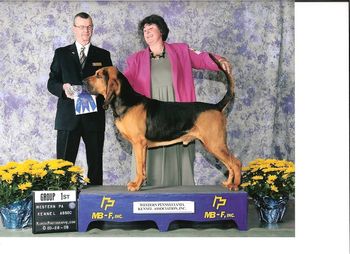 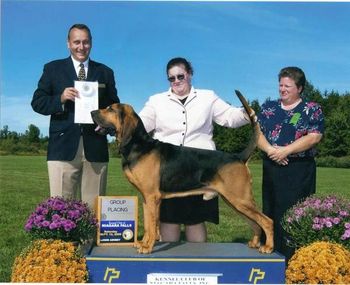 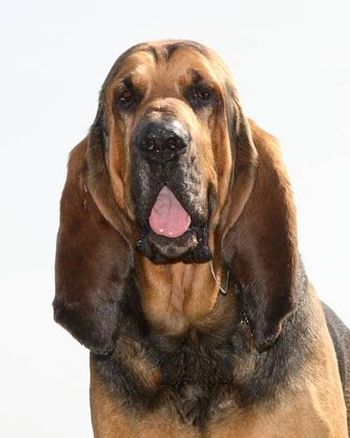 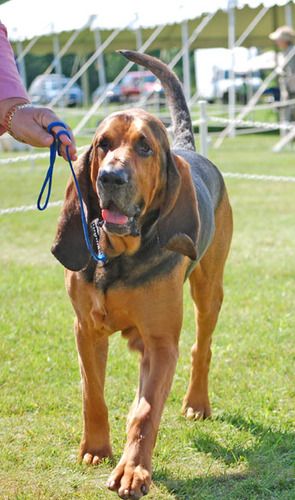 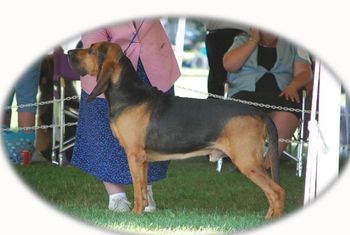 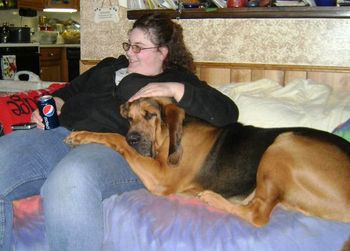 Renee and Baggins watching Dancing with The Stars...footwork is very important! 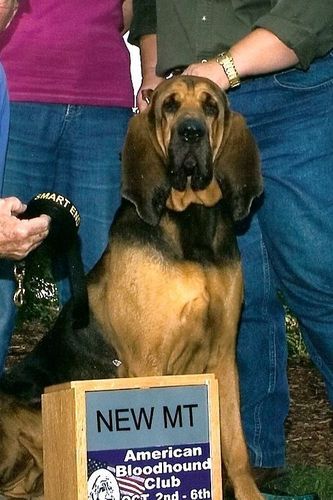 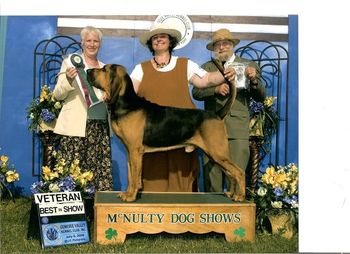 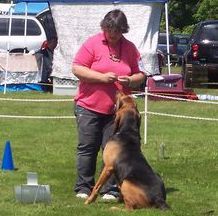 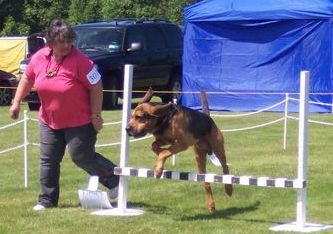 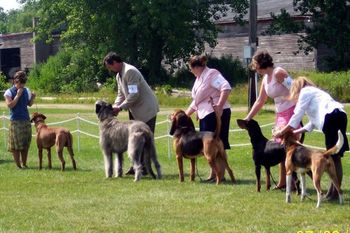 Renee & Baggins in Group on Sat

Retireing on a high note.....a Group 4 in Cambria NY and those final points for hisABC Show Dog Hall of Fame application!

2 weeks later, Baggins took his MTI to qualify for his Working Dog Hall of Fame as well. Good job!

Baggins is an outcross for us. Honey was bred to Ch Small Town's Knotty Knoggins, a top winning boy from Rectory lines with a natural breeding although Knotty was 9 at the time. Honey was a wonder-Mom, except for producing 8 boys and only one girl! We ended up keeping 2 puppies from this litter. Lola (who has her own page under The Girls) and Baggins have been a Tag Team ever since.

Baggins began his show career with a bang, going BOB over a special two days in a row at Buffalo, NY. Although I have done very limited showing with him....rarely more than one weekend a month....he has spent the last 4 years in the Top 25 Bloodhounds and has received an invitation to participate in the Eukanuba show every year it has occurred. He finished out of Bred By and has been hitting the Group ring ever since. He trails as hard as he shows, getting his ManTrailing Intermediate title in Canada and breezing through his US MT too. He has consistently made the cuts in every national he has shows at, usually being one of the last excused before the Awards of Merit are handled out.

Because he moves out so strongly in the group ring, I asked a friend with younger knees to show him for the last year, and Renee and Baggins have made a very strong team. With more than 15 group placements in the US and Canada, Baggins is still going strong at 7 years old. He is certainly not ready to retire!! Until he is, we'll keep showing him so he can stomp his feet and demand ribbons from the many many judges that have admired his "ass n' attitude" in the ring! He has begun his Veteran career by taking a regular Group 4 in Alexander, NY and going Best Veteran in Sweepstakes at the Erie Shores all breed show in Canada.

Awarded dual titles of Show Dog Hall Of Fame and Working Dog Hall of Fame at the 2010 American Bloodhound Club Nationals, he was also invited to the 2010 Eukanuba. Not bad for a 9 year old bloodhound!

Baggins died at 10 years old. I wish I could have had him forever 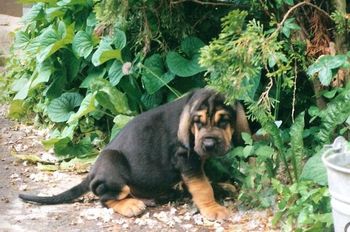 Me? Eating the plants? Why no, mamma!! 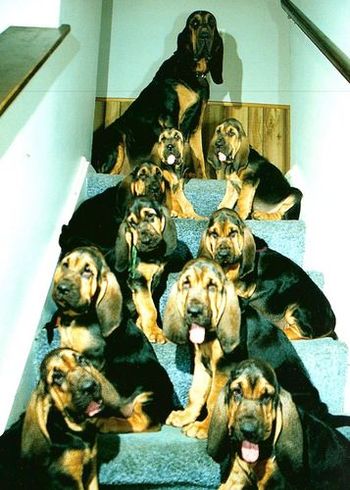 The whole Honey x Knotty Knoggins litter. Baggins is the 2nd from the top on the right hand side. 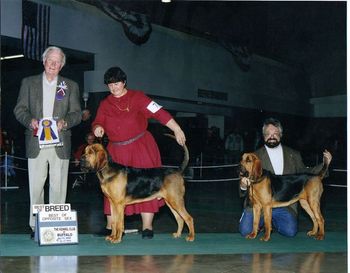 Baggins and Lola going BOB & BOS over a special at 6 months old! 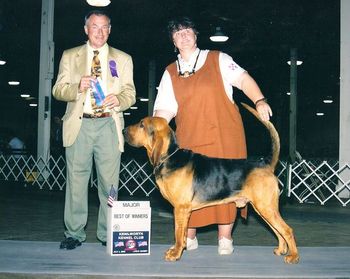 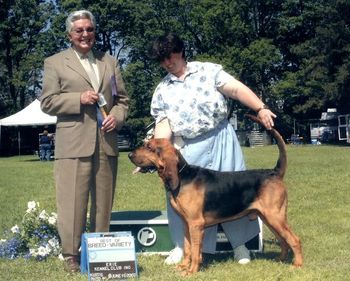 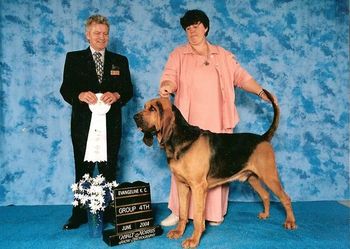 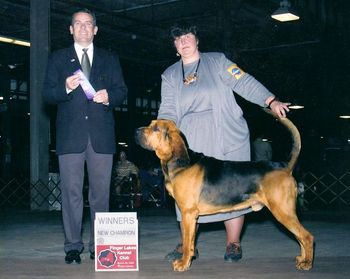 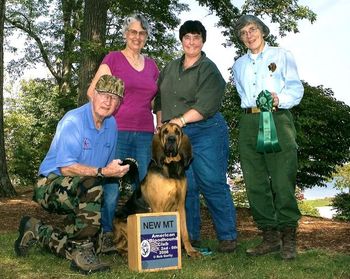 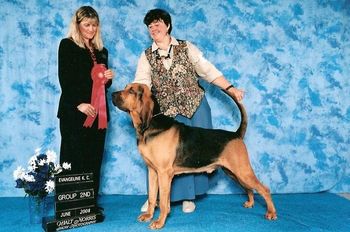 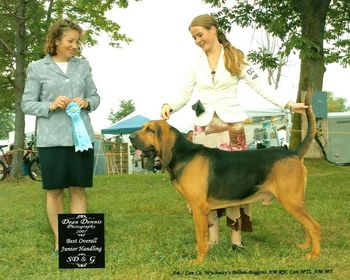 Baggins helped a young Quebec teen win Best Junior Handler at our 2007 Canadian Nationals even though he didn't understand any French and she didn't speak any English! The language of dogs is truly international! 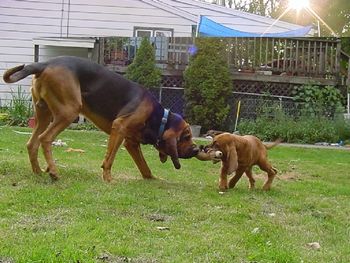 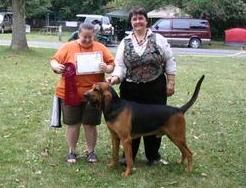 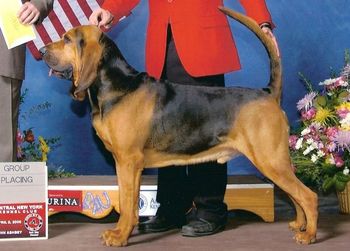 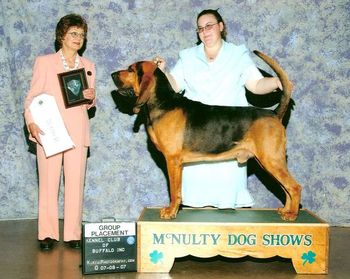 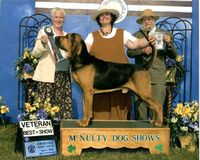