Why choose a Bloodhound?

Why choose a Bloodhound?

They look like animated Beanie Babies with those wrinkled faces and adorable big feet....who can resist a bloodhound puppy? But that cute puppy grows up to weigh more than 100 pounds in less than 8 months, and will stand anywhere from 26-30 inches at the shoulder, depending on gender. The cute puppy becomes a very athletic, very busy teenager, and it takes a lot of love, patience and training to make him or her into a good companion. Bloodhounds love to chew, dig and follow those big noses wherever they lead, which can make for some frustrating days and weeks and months. The old stereotype of the bloodhound snoozing all day on the porch is totally false. These are busy, problem-solving dogs, always looking for something to do, and if you don't have a project, they will gladly improvise!

Bloodhounds are sloppy. Those wonderful jowls on those noble faces will fling slimy, sticky slobber up to 10 feet in any direction. Most owners wash their walls twice a week and their ceilings once a week!! Every drink is a chance to turn your floor into a small lake. Your clean clothes were made to be used as napkins. Bloodhound owners have been known to leave the house and change into their dress clothes outside.

Bloodhounds share the traditional hound stubbornness, and will test even experienced owners during any training process. This is no Labrador! Some more popular breeds are eager to please, but the bloodhound is eager to test limits. Not in a malicious way, more like a cross between a three year old child and a 13 year old teenager! Bloodhounds require a tremendous amount of daily exercise, so a large, fenced in yard, along with a companion (either you or another dog to play with) is a must. A bloodhound left on their own will not exercise themselves, instead, they will eat their way through the door to get back to you. The size of the yard doesn't make much difference -- it's the willingness of the owner to spend time with the dog. Although not ideal, they can make it as apartment dogs IF you are willing to take the time and energy to give them enough running and smelling time.

Remember, bloodhounds have the most sensitive noses of any dog breed. Humans have about 10 million sensory cells in their noses, the average dog 100 million, the bloodhound 300 million. The best way to describe this breed is "a nose with a dog attached!" Many a bloodhound owner has found out the hard way how fast those long legs can carry that big nose around, and how little difference an invisible fence makes if the hound wants to go someplace!

Now having said all that, the bloodhound is a loving, loyal companion. They are good watch dogs, but lousy guard dogs. They will bark and bay at the arrival of their next new friend, but would far rather cover the intruder with big slimy kisses and muddy pawprints than protect the family silver. They will consider themselves lapdogs. They love challenges and lots of family activity. But as a potential owner, you must have a great deal of patience, a great deal of time to devote to training, and a great sense of humor.

Most bloodhound owners will admit that their dogs make them laugh, even through tears. You have to be willing to be humiliated in front of your friends and know that, immediately after you brag about anything, your dog will go out of its way to prove you wrong. But they are the very best in the world at what they do and, if your ego can take the beating, they are a breed like no other. By the time they are 3 years old, they are the world's best companions and pets (as long as you don't mind your lap being soaked down with spit at regular intervals). Their lifespans are too short, 7 to 9 years is an average span, but I wouldn't have my heart broken by any other breed.

If you still think the bloodhound is for you, you have come to the right place.

General Character
The Bloodhound possesses, in a most marked degree, every point and characteristic of those dogs which hunt together by scent (Sagaces). He is very powerful, and stands over more ground than is usual with hounds of other breeds. The skin is thin to the touch and extremely loose, this being more especially noticeable about the head and neck, where it hangs in deep folds.

Height
The mean average height of adult dogs is 26 inches, and of adult bitches 24 inches. Dogs usually vary from 25 inches to 27 inches, and bitches from 23 inches to 25 inches; but, in either case, the greater height is to be preferred, provided that character and quality are also combined.

Weight
The mean average weight of adult dogs, in fair condition, is 90 pounds, and of adult bitches 80 pounds. Dogs attain the weight of 110 pounds, bitches 100 pounds. The greater weights are to be preferred, provided (as in the case of height) that quality and proportion are also combined.

Expression
The expression is noble and dignified, and characterized by solemnity, wisdom, and power.

Temperament
In temperament he is extremely affectionate, neither quarrelsome with companions nor with other dogs. His nature is somewhat shy, and equally sensitive to kindness or correction by his master.

Head
The head is narrow in proportion to its length, and long in proportion to the body, tapering but slightly from the temples to the end of the muzzle, thus (when viewed from above and in front) having the appearance of being flattened at the sides and of being nearly equal in width throughout its entire length. In profile the upper outline of the skull is nearly in the same plane as that of the foreface. The length from end of nose to stop (midway between the eyes) should be not less than that from stop to back of occipital protuberance (peak). The entire length of head from the posterior part of the occipital protuberance to the end of the muzzle should be 12 inches, or more, in dogs, and 11 inches, or more, in bitches. Skull-- The skull is long and narrow, with the occipital peak very pronounced. The brows are not prominent, although, owing to the deep-set eyes, they may have that appearance. Foreface--The foreface is long, deep, and of even width throughout, with square outline when seen in profile. Eyes--The eyes are deeply sunk in the orbits, the lids assuming a lozenge or diamond shape, in consequence of the lower lids being dragged down and everted by the heavy flews. The eyes correspond with the general tone of color of the animal, varying from deep hazel to yellow. The hazel color is, however, to be preferred, although very seldom seen in liver-and-tan hounds. Ears--The ears are thin and soft to the touch, extremely long, set very low, and fall in graceful folds, the lower parts curling inward and backward. Mouth--A scissors bite is preferred, level bite accepted.

Wrinkle
The head is furnished with an amount of loose skin, which in nearly every position appears superabundant, but more particularly so when the head is carried low; the skin then falls into loose, pendulous ridges and folds, especially over the forehead and sides of the face. Nostrils--The nostrils are large and open. Lips, Flews, and Dewlap--In front the lips fall squarely, making a right angle with the upper line of the foreface; whilst behind they form deep, hanging flews, and, being continued into the pendant folds of loose skin about the neck, constitute the dewlap, which is very pronounced. These characteristics are found, though in a lesser degree, in the bitch.

Neck, Shoulders and Chest
The neck is long, the shoulders muscular and well sloped backwards; the ribs are well sprung; and the chest well let down between the forelegs, forming a deep keel.

Legs and Feet
The forelegs are straight and large in bone, with elbows squarely set; the feet strong and well knuckled up; the thighs and second thighs (gaskins) are very muscular; the hocks well bent and let down and squarely set.

Back and Loin
The back and loins are strong, the latter deep and slightly arched. Stern--The stern is long and tapering, and set on rather high, with a moderate amount of hair underneath.

Gait
The gait is elastic, swinging and free, the stern being carried high, but not too much curled over the back.

Color
The colors are black and tan, liver and tan, and red; the darker colors being sometimes interspersed with lighter or badger-colored hair, and sometimes flecked with white. A small amount of white is permissible on chest, feet, and tip of stern.

Approved: January 9, 1996
Effective: February 29, 1996
While the standard calls for the average and ideal height of an adult male Bloodhound to be between 25" to 27", you will see them as large as 32" or more at the shoulders. The bitches average a bit smaller (23" to 25"), but you will still see a few reach the height of 28" or more. They can weigh up to 130# or more. While you will also find them smaller than the standard, these are not small dogs by any means. This pretty much puts their tails at coffee table height. They do not reach their full weight and body type until 2-3 years of age and their brains seem to follow that trend.

Recognized Bloodhound Colors
The Bloodhound comes in 3 colors: Black and Tan, Liver and Tan (Red and Tan) and Red (Tawny). A small amount of white is allowed on the chest, feet and the tip of the tail. While there are variations of these colors, they still fall into one of these color patterns. A predominantly black where the black "saddle" covers most of the body except for some red on the legs and face is often referred to as a "black" but is still considered a Black and Tan. This can go the other way also, where the saddle on the black and tan or liver and tan can be badgered or even just a few dark hairs. The variation in the "red" color can be anywhere from a light tan to a deep red. Below are examples of the three colors. 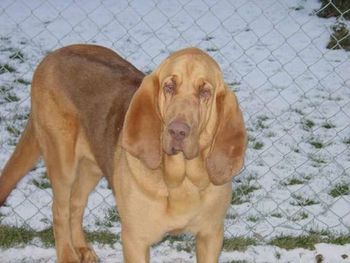 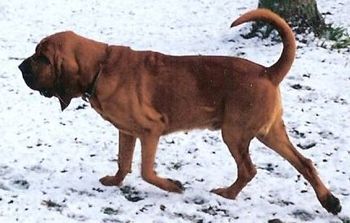 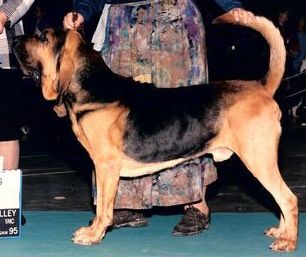 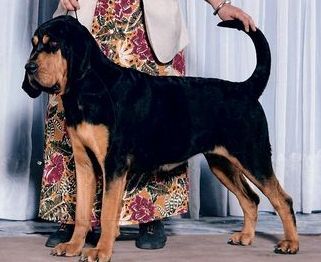